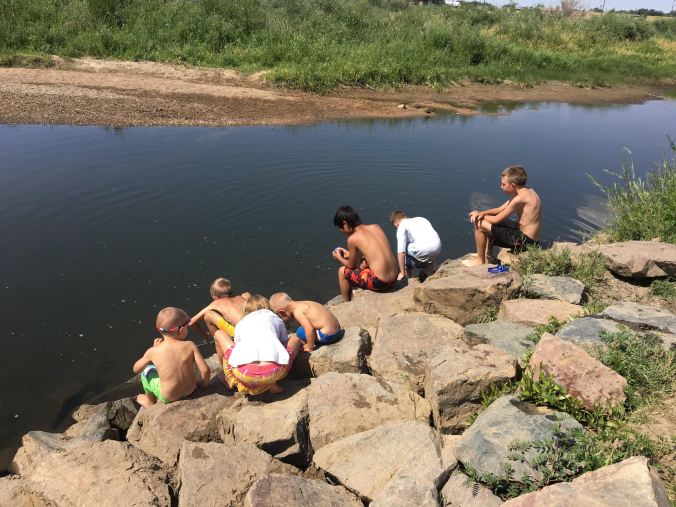 Here’s my ideal dream childhood for our kids

This isn’t the first blog about the subject.  I’m sure there are thousands out there.  And this isn’t a “here’s how it’s done” post either.  It’s a struggle for everyone and I’m not sure there’s an easy solution, as much as I’d like it to be.  Or I’m in too deep to see the trees for the forest.  Oh how I’d like to get the nerve to smash all the screens our kids have and never look back.  But I don’t.  Why?

Pre-children (you know the phase when you know exactly how children should be raised) I had very strict ideas for our home.  I pictured a TV-less environment.  IPhones, laptops, and iPads weren’t really even invented yet.  TV was it.  I vowed to never own one, let alone use it as a babysitter for children.

Things went swimmingly when our first was one.  And for the most part, two.  Then came baby brother.  I owned a laptop that could play DVDs.  When I tried to get baby down to sleep it was a losing battle with the toddler.  I guiltily put a Veggie Tales DVD in.  As the boys grew, and later our daughter, 30 mins of DVD was what they got.  IPhones and the like still weren’t really on the horizon.

As things tend to do, change was unnoticeably gradual.  I felt guilty for letting them watch anything, but grateful for the distraction.  None of my kids watched any screen time before the age of 2.  That I can be proud of.  But over time, as Hulu, Netflix, and Amazon Prime became popular, the slope became more and more slippery.  We weren’t watching “TV” but it was on the computer.  30 minutes went to 60, and then 90.  I do have to say I limited it for the most part to less than 90 minutes.  The upside of that, besides mind-numbingness, is that when they do watch, they are glued to their seats.  It does come in very handy when needed.

Then iPhones and iPods happened.  I was adamant kids shouldn’t own any and felt good that I could hold on to SOME kind of integrity with screens.  Until they came home from Dad’s one day, all with iPods/phones.  The sell was that they could text or call us.  Or text or call dad when they were at home.  OK, makes sense.  Games quickly popped up.  The oldest was sneaking his in the night.  We were fighting non-stop about where their iPods were at any time.  So we put passwords on and took off the internet and games.  Until they figured out how to crack passwords.  Suddenly everyone was on their screen non-stop.

The other night we were spending some quality time with the older kids (OK we were watching a show with them which actually only happens once a month!) and I get a text…from the 5 year old in bed in the next room.  At 9pm.  It was hard to be too mad with an, “I love MOM” text, and it broke my heart that he wanted to text me that and have it get him in trouble.

It’s such a crazy struggle I don’t know what to do.  It feels overwhelming to find a solution.  I wish it were simple and I often find myself yelling that, “I’m this close to smashing your phone!  For real this time!”  I’m tired of the battles.  I’m tired of setting up systems that require constant monitoring.  I’m tired of writing lists of things they need to do to earn screen time.  I’m tired of monitoring everyone’s screen time.  I’m tired that everyone is different and needs different monitoring.  Our daughter uses hers responsibly.  She gets to keep hers with her.  Our oldest doesn’t.  We are constantly fighting him.  “Where’s your phone?  Did you do your work first?  Can you change those socks you’ve been wearing for 5 days first?  Have you showered this month?”  We didn’t think we had a problem with #2, but now we do.  He’s constantly playing games on his.  It’s hard because he spends hours a day playing sports.  Doesn’t he deserve downtime?

It’s not just personal devices.  When we first moved to our new home, we promised the kids a little incentive.  We’d buy a new TV and get cable.  The summer Olympics were going to be on, and #2 could catch football games or hockey games.  However, as things do, it got out of control, fast.  When we weren’t paying attention, they’d sit and watch.  They’d watch when we’d leave the house.  They’d sneak out and watch at night.  They’d mindlessly sit there while I would serve them.  One day they came home from school and the cable magically no longer worked.  But we still had Netflix.  Which worked for a while, as did a strict 9pm bedtime for the older ones.  They stuck to that pretty well, at least in this one case the consequence of the cable disappearing worked well.  Until the other night when we went to drop of a few kids at sports, leaving a couple behind to clean up dinner and we came home to them watching TV, both blaming the other for the “misheard” instructions.  No more NetFlix now either.  I have a laptop they can use.  We of course had to password protect it to begin to contain everyone’s use of it.  But there’s always a loophole.  I accidently leave it open.  Someone asks to borrow it to “look something up” while I’m making dinner and an hour later they’re contentedly absorbed in a math game.  Or it gets passed from another child who had a legit use for it.  They are down to DVDs, and their personal devices.

I know I’m getting worn down when I catch myself with thoughts like, “I feel bad they have nothing to do!”  Who am I becoming!?!?!?  Why is this so hard?  I had such strong convictions about all this.  I rue the day it entered our lives, because it would have been easier to prevent than to take away.

I struggle I think because while I don’t want them to have them at all, I don’t want to be the bad guy.  It sounds stupid, I know, but these devises seem like more than just a toy.  It’s cultural.  It’s the future.  I want to protect them from it as long as possible but at the same time don’t want to fight a losing battle.  Can I even stay off my phone?  I can justify it since I don’t play games, I’m checking for “important” communication, or keeping in touch with the latest on Facebook.  But it’s all the same.  On the other hand, I stayed off my phone for an hour this afternoon, and missed 3 calls from the school and 2 from my wife after she had to pick up the Kindergartener from school because he had a fever.  Hard to do when you really do need to be attached but not addicted.   I’ve also checked my e-mail 378 times while writing this blog and only received 1 junk email in this timeframe.

I said yes to screens because it was going to help the kids keep in touch.  Text me when they made it to the park.  Call me when they are at a friend’s.  These can be good, beneficial uses.  But now they don’t have call or text capabilities.  They just have games.  And we’re back to square one.  I’m the bad guy, the enforcer, the mean one that has to constantly monitor, give exceptions when it seems like the right thing, only to have it be taken advantage of once again.  I have to think up the list, the time, check the clock, and collect them at the end of the day.  It’s exhausting.  It’s impossible.

What stops me from a full ban?  I don’t know.  I think it’s the hope that there can be moderation.  That they could earn screen time at the end of a productive day.  That we could sit down as a family and watch one show.  That their phones are for texting me when they’re at the park.  That there can be some good that comes from them.  That they won’t be the odd ones out.  I also get it that it’s hard to be the kid at youth group that didn’t get to bring a device, because everyone else there is staring at their screens all night.

Our 14 yr old is so clever he’s talked me into letting him take his iPhone to school because he’s earning money with a steps app.  He’s suddenly walking and exercising like mad trying to earn a computer from this app.  How do you argue with that?  Yesterday he ran 3 miles to earn points.  I don’t know whether to be proud or crawl under a rock.  Screens are really an addiction, and perhaps we need to help them learn to control it at a young age.  I don’t know.  And this is just the tip of the iceberg.  We haven’t even run into content issues…yet.   When you are fully immersed into parenthood, sometimes the answers don’t seem clear anymore even though they probably are.   I don’t have the answers, but perhaps you do.  I want to hear other family’s screen rules and if you have the same battles!  Bonus points for successful limits!