…But twice the woman.

In my past life, before kids, before a wife, before anything, I completed an Ironman.  The Ironman is an official triathlon distance race (trademarked and everything) with a swim of 2.4 miles, a bike of 112 miles, and a 26.2 mile run.  There are a dozen or so throughout the year around the world.  I did it when I was young and stupid, and full of determination.  I actually did pretty well, at the tender age of 24, and vowed someday I would do another.  I had wanted to do it while I had the freedom and money to, before I had kids.  The training was the hardest.  Even with no kids and just a full time job, I felt like all my free time was used up training.  Or sleeping because I was exhausted from training.  Or eating everything I could get my grubby little hands on because my metabolism was working overtime.  I kept a jar of peanut butter at my desk.  Someone brought in donuts?  I’d take 3!  It was really time consuming, but a goal I wanted to say I did.  Someday I had hoped to do another.  Perhaps when I was older, more mature, and even more determined.  I imagined doing it as a young mom, proving to the world that I still had what it took.  I remember my gymnastics coach always said, first time’s for guts, second time’s for skill.  The next one I wanted to do well.  I mean, I did ok for my first but it seemed like I coasted more on my slight athletic ability than training.  I got pregnant the next year with my first baby, and, as you all know, went on to have dozens more.  Or 4.  Or 5 or whatever.  I didn’t even really keep up with running once kids came.  And biking?  I did plenty of pulling the kids around in whatever kid-bike-toting contraption I had, but to go out for a 50 mile ride was outside the realm of reality.  Not to mention swimming.  You know how much effort and time it takes to coordinate getting to the pool?  (That does remind me of a funny story…A year ago my wife and I coordinated with my ex to take the kids overnight so essentially all we wanted was to be able to get up early and go swimming.  He agreed.  We woke up and drove to the rec center and did our swim workout.  I got out of the pool and noticed several texts from him that he had sent while I was swimming.  Something to the effect of, “Hey, I dropped our 4 year old off at the house with the 8 year old.  Don’t know why you haven’t seen this text but he’s at your house.  I’m headed to {same} rec center with the older boys.”  Uh….luckily we had an extremely chill 4 year old who basically would rather do his own thing.  We thus sauntered into the gym purely for the pleasure of watching the realization of the events register with him…He started running…Anyway, not to worry, it was only about 10 minutes total before we got home.  The moral of this story is, even with several adults, getting to the pool is no easy task.)

I’ve written a bit about how much effort it took for me to get back into shape, largely with the help of my wife, motivating me as a newly found friend about 3.5 years ago.  I had been a runner since high school, and the times when I had tried to start running sporadically between kids didn’t seem that difficult.  Running stays in your blood, and muscle memory and all that fancy stuff.  Unless you’re 37 and haven’t done it in 10 years…then it’s horrible.  I never want to be that out of shape again in my life.

So fast forward to last year when I did my first post-kiddo sprint (much shorter not crazy distances) triathlon.  I fell in love with the sport all over again.  What I love about it most is that just about the time you are sick of one activity, it’s time to transition to the next.  You always do it in swim-bike-run order so by the time the run hits, your mind thinks, “Gee you can’t stop now, you’re 2/3rds done!”  I also happen to run my best times in a tri rather than a running race.  Races make me VERY nervous (traumatic flashbacks to high school track meets), but in a tri, by the time I get to the run, I don’t really care much anymore and end up running faster.  Of course I still panic in the beginning of a tri, which is in an open-lake swim with hundreds of people trying to swim over you or kicking you or grabbing your ankles in a panic.  Clearly a much better scenario in which to have anxiety…

This fall my wife was TDY for much of fall and winter, but during her one month home at Christmas she managed to persuade me into signing up for a half Ironman in Wisconsin in June.  She buttered me up with how proud she would be of me, how amazing I would be, how she would brag about me.  It works every time.  The things I do to impress this woman is ridiculous!  And, oh, sweetie, I’m just going to be gone for the next 10 weeks but I’m sure you’ll find time to train and tend to the 5 kids and the house and the brand new puppy, that’s how amazing you are!  (See how good she is at this!?!?)

Well, I did do it.  And I was amazing at it.  Training while she was gone, I mean.  I found the time to train and I stuck with it.  It was good to sign up for a big race (FYI the half Ironman is as it sounds, half the distance of a full, so 1.2 mile swim, 56 mile bike, 13.1 run) because it forced me to actually train and not skip workouts.  You can get to a point in which the little races become “Ya, I could just do that distance.  I’ll train next week.  Or tomorrow.  Or after vacation is over.”  This was more of a “I may literally die and/or pass out and/or scratch if I don’t do exactly what this free internet training plan is telling me to do” kind of race.

I knew the pitfalls were going to be that this was an early season race, early June, and where we live there really isn’t much biking outside until June.  So I had to do it all on my trainer.  Which works for 1 or 2 hours, but it’s pretty hard to sit and spin for 4 hours indoors even if you can watch TV.  And while it was the one sport I could do without leaving the house, ideal for nap times, inevitably I would be interrupted half a dozen times.
My goals were to finish, finish without injury training, finish well-trained.  I got the first 2.  I guess when you have 5 kids you may never feel like you can train enough.  I finished it though.  I was disappointed with my time but can rationalize it at least.  And it was 95 degrees and humid (those conditions don’t exist here).  And a hundred hills on the bike course (no joke) of which I was inadequately prepared.  So, the good news is I finished.  But when you have a less than satisfactory time there is really only one thing to do…Do another one.

To summarize my thoughts, my life lessons in all of this:  I enjoy (or, not so much during the race, but in the future, could potentially enjoy) that distance.  Long enough to be tough, but not all consuming like the full distance.  To train for something like this is a good goal as well but bordered on too much time it was taking from my other work and the kids.  But it’s also good to show your kids and motivate them to challenge themselves.   The big take away is this:  I had predicted that I would be tougher at 40 than I was at 24.  While I really can’t fathom how I managed a full distance, I believe this to be true.  The mental toughness I’ve acquired in the past 16 years is impressive.  During the race, no matter how bad it sucked, I knew I would finish.  I knew 16 years ago as well, but this was different.  And the difference was that while I “proved” something this time, I didn’t need to prove anything I didn’t already know.  This race, while tough, is now in the grand scheme of my life, trivial.  Of all the things I’ve conquered, this race is a blip on the screen.  Fun bragging rights but sometimes my everyday challenges with raising kids are more impressive to conquer, but I don’t get a medal at the end of the day, which I should, I think!

That being said, I’ll let you know how it goes next year! 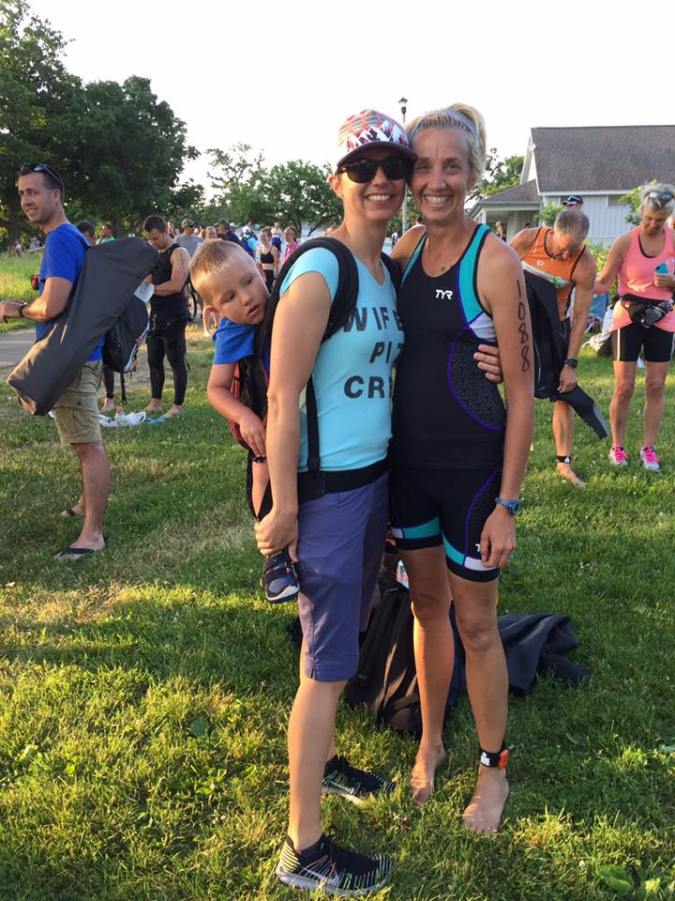